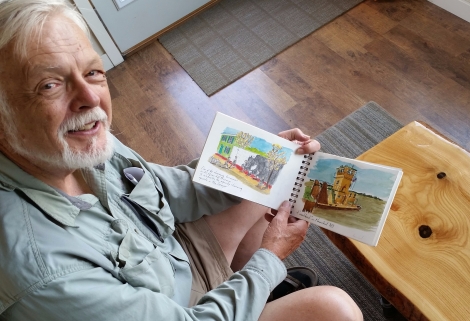 He happened to be in town visiting friends, so he stopped in to show me what he’d been doing since he saw me last. (This kind of thing is a complete thrill for me!)

A little background: Carsten had been part of the Tuesday Night Drawing Club here at greenwater in the winter of 2014. During those sessions, he had revived an old practice of drawing that he’d used as a draftsman in the military long, long ago. He really enjoyed those Tuesday sessions and had big plans for his sharpened skills. He was going to spend the following summer hiking his way through Norway and he did not want to take a camera–he wanted to draw what he saw.

When he stopped in the garage, he had his sketchbook along and offered to show me what he had drawn and how he had used those drawings to capture his experiences in a better way than photos ever could. We had a long talk about the hand-brain connection and how drawing his world has expanded and enhanced it. This is a special guy, taking notes on his life with pencils and paint as he travels through it. What a beautiful thing to witness. It was a fine gift to me to stop and share his travel journal with me. A very fine gift.

May your road be long and colorful, Carsten.

The focus for Drawing Club was capturing negative space. This involves seeing it first. Understanding the value of negative space is essential to an art practice, but it isn't the flashiest study. We started by warming up with white media on black, then moved to drawing the negative space only. It's a brain bender, but it is the good stuff.
On Monday we painted starscapes while learning a variety of useful techniques. We blotted, mottled, sprinkled and lifted. There was so much success-even when we doubted ourselves. Like the astronauts say, "It's a long journey to the next galaxy." This is the good stuff.
The Drawing Club fearlessly tackled the challenge of glass objects on Tuesday. We concentrated, chose our tools and stuck with it until our subject emerged from the page. Looking for dark and medium tones beyond the highlights is the hard part. But we're fearless because this is the good stuff.
We painted blues on Monday-the blues of the sea! We practiced our opacity, our mixes and our brush strokes. Though the lessons are simple, the work is hard. And yet, magic still happens! This is such good stuff, really.
What an amazing day for Porch Fest! 😎 Thank you for playing at the garage. We love to host this community event!
It was a big night for the Drawing Club! We practiced looking at landscapes and orienting ourselves to the horizon line, background and foreground. We learned a new form of perspective, then used it to depict reflections in water and ice. We are drawing environments in graphite and chalk, day and night, getting better all the time. This is the good, atmospheric stuff.
Loading Comments...
%d bloggers like this: