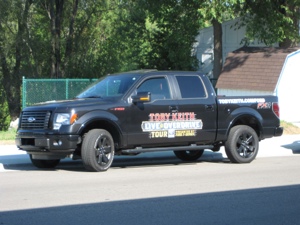 Personally, not a fan. Although I can relate to the comraderie of a red solo cup and I have been known to point to my dog while singing the last line of “Whiskey for My Men, Beer for My Horses”—I can’t say I am a big Toby Keith-type. But New London attracts many types…not just mine.

On Thursday morning, a fellow wearing a FORD EVENT STAFF t-shirt pulled up and parked right on Main Street. At first I thought he was lost, but he walked around to the passenger door, loaded his pipe and had a leisurely smoke on the sidewalk.

He eventually made his way into Car Quest Auto Parts. While he was inside, there was a long string of passersby like myself, peering, taking pictures, and wondering–so where’s Toby?

While I was taking pictures, I realized that the title of the tour was a little confusing. Which way do you pronounce LIVE? Because it matters. Obviously I am not a TK concert-goer, just a passing observer, but what does Toby mean? The long-I version of live suggests the tour is live-performance-running-in-high-gear-range. I guess I prefer this pronunciation because it is less preachy and puts the pressure on TK rather than the audience. And I’m betting the promoters intended that reading too. It rhymes.

So the FORD EVENT guy came out with the Car Quest guy and gave him a tour of the truck. They talk, consult, discuss, and go back in the shop. This same routine goes on all day with other Car Quest employees, curious kids, random residents and Toby Keith fans.

I believe surprise is essential when you want to unlock your creative expression. Tonight, it was an elephant warm-up exercise. At first, it might be intimidating, but this one was fun. The rest of the evening we focused on the surfaces and structures of birch trees using water soluble graphite. We know how to handle the good stuff.
Our practice this week circled around pigment density, layering and adding other mediums. We got to know the work of Farah Nebeela Khan and her wizardly watercolors. Check her out @fnkdesigns and her Etsy shop. We practiced control, but we won't let it go to our heads! This is the good stuff.
Over the last couple of months, I've had the chance to work with the Art Club at Willmar High School. We created an image together in many different interpretations. 48 tiles, one crazy-fun painting. Acrylic and paper collage on canvas tiles, 96"x32" Ms. Canavan will hang it in their art room to inspire future projects. Collaboration is fun stuff!
Our drawing practice has been focusing on understanding form and volume lately. This week, our subject was cows, so we began by imagining the surface of the cow in our reference, then we made our drawing. More sooty smudges, but also more skills. This is the good stuff.
We started several paintings this week, using a variety of techniques. Wetting, dropping, floating, dabbing, blotting-all the things. We were slowed by drying time, but now we know our tools and materials just a bit better. We might finish them all. 😊 This is the good stuff.
Drawing = seeing + practice. Join us sometime!
Loading Comments...
%d bloggers like this: