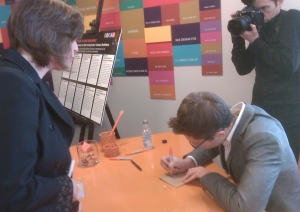 I was a fan of his before he hit the New York Times Bestseller List, because he’s a contributor to so many of my favorite programs on public radio. I have long loved the intertwining of science and creativity, and he was regularly called on to help explain the facts behind the mystery of our brains. He’s an excellent thinker and communicator. I watched him not only survive two visits to the Colbert Report, but leave making a point–both times. I then listened to the audio version of his bestselling book, Imagine: How Creativity Works, which he narrated himself. He was in my ears and my brain and I became an even more committed fan. He’s a skilled writer, weaving raw scientific data with stories of creative insight in a way that spoke truth to me. I could see myself and my experiences in his descriptions. His book explained my brain, and made me feel normal in a way I hadn’t before.

Then came the SPARK conference at COCA in St Louis, where he and Seth Godin (a wizard in the marketing sphere) were slated to speak. I took time off work, invested in plane tickets, two nights at a hotel, meals and a hefty conference fee to see this guy. I am not typically wiggo about famous people, but this guy was a ‘thought leader’ and I liked where he was leading the discussion. The conference was terrific for me on a personal level–because it became a spark of insight of my own and led me to where I am now with greenwater.

Two nights ago I heard a report on NPR that Jonah Lehrer had resigned his post at The New Yorker and Michael Moynihan was being interviewed about his exposé of Jonah’s use of Bob Dylan quotes in the book–and their veracity. It wasn’t good. In fact, it was terrible. Terrible along the lines of that Million Little Pieces guy, James Frey. The whole thing made me sick.

I want to klap Jonah on the back of the head, Katzenjammer Kid-style. “What the heck were you thinking?!,” I want to holler.

There is heavy examination going on in the media now regarding the details of his falsehoods and cover-up. I’m a bit torn about it all. I am spending my time thinking about the value that book gave me, in spite of the falsified Dylan quotes. I don’t mean to dismiss the lies Jonah told to make the problem go away, but it is a baby & bathwater thing for me. I still love the baby. The self-discovery I experienced while enjoying that book was real, and it still has value to me.

As for the bathwater–I hate the idea of folks making up stuff and packaging it as fact. Especially journalists. Most especially talented journalists. Holy heck, your industry is being taken over by hucksters like me with no training at all–the last thing you need is to abandon the code that makes you a REAL journalist. I just hope Jonah works hard to get his integrity back and rights his ship. His talent is immense and his skill is needed. But geez, you gotta work clean, kid. Klap!